Diana Berrouet Garcia has just been nominated as Managing Director of the newly formed company, Domaines Jacques Thienpont. Diana will take over many of the roles that Jacques has played in the development of his three Bordeaux châteaux : Le Pin in Pomerol, L’IF in Saint Emilion and L’Hêtre in Castillon. 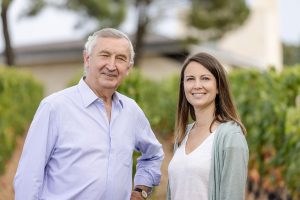 Jacques Thienpont is the grandson of Georges Thienpont who purchased Vieux Château Certan in Pomerol in 1924. Jacques had the opportunity to purchase Le Pin in 1979 and to create a 100% Merlot wine which has become well-known throughout the world. In 2010, he had the chance to buy L’IF, situated next to Château Troplong Mondot (which coincidentally had been owned by his grandfather for a decade or so in the 1920s). The third estate was added in 2016 when, together with his sister Anne Thienpont Jacques purchased a beautiful, organic estate in Castillon, which they named L’Hêtre. Each of these three estates is looked after by nephews or cousins of Jacques, whose fathers are all members of a well-known dynasty of winemakers in Bordeaux.

Diana Berrouet Garcia is from a family of winegrowers and producers of Cava in the region of Valencia. She received her Agricultural Engineering and Oenology diplomas at the Universidad Politecnica de Valencia and an International Masters in Science from Angers before working at Château Teynac and Corconnac in the Médoc as Estate Manager In 2015, she became Technical Director at Château Petit-Village in Pomerol and following an acquisition by Château Beauregard, she was appointed Assistant Director General of the two estates in 2020. She is married to Jean-François Berrouet, who heads up the family wine estates on the right bank of Bordeaux where they live with their two children.

Diana Berrouet Garcia will assume her new role at Domaines Jacques Thienpont from the beginning of January 2022.