November marks the highly anticipated release of the season’s “first wine of the harvest” — Georges Duboeuf 2019 Beaujolais Nouveau. As is customary and per French law, Beaujolais Nouveau is released at 12:01 a.m. on the third Thursday in November (this year on November 21).

The 2019 wines—Beaujolais Nouveau, Beaujolais-Villages Nouveau and Beaujolais Nouveau Rosé—are the expressive results of this year’s harvest. “This vintage was strongly shaped by the weather, which means our 2019 Beaujolais Nouveau will be unique and full of individual character,” said Franck Duboeuf, who leads Les Vins Georges Duboeuf, founded by his father Georges in the early 1960’s. 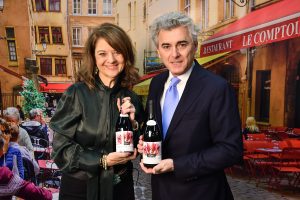 The 2019 vintage Nouveau bottles sold in the U.S. feature the artwork of this year’s Georges Duboeuf Beaujolais Nouveau Label Artist’s Competition winner, Texas native Laura Runge. Her Joyous Crush painting will appear on over one million bottles of Duboeuf’s 2019 Nouveau wines. The artwork, selected from nearly 700 pieces from around the world, is a representation of the celebratory harvest in France, with deep pinkish-red and purple tones to mimic the colors of the wine and greens and blues to reflect the earth and sky.

“With the three Duboeuf Beaujolais Nouveau wines, friends and family have more options this holiday season to gift, share and enjoy the first 2019 vintage wines from the Northern Hemisphere,” says Dennis Kreps, co-owner of Quintessential with his father, Stephen D. Kreps. Quintessential is the exclusive importer of Les Vins Georges Duboeuf in the U.S.

Since the 1900s, grape growers and vintners from Beaujolais have gathered to celebrate the harvest with the just-made wines during a festive gathering of family and friends. In modern times, this “first wine of the harvest” has kept the economy alive in Beaujolais. Les Vins Georges Duboeuf always pays a premium price for the grapes and the juice of over 300 growers. A lot of time, thought and effort goes into making this youthful, easy-drinking wine that Georges Duboeuf has declared, despite its modest price, “the most complicated wine to make.” It has come to symbolize a turn of the seasons and the beginning of the holidays, pairing perfectly with a Thanksgiving turkey or Christmas ham, as well as all the trimmings.